Dana Anand India Private Limited (DAIPL) is a Joint Venture between Dana Holding Corporation, USA, a world leader in Axles, Driveshafts, Structural Sealing and Thermal-management products and ANAND, India. Likewise, DAIPL is a leading supplier of these products in the Indian auto components industry. With an average annual profit of MINR 1000, DAIPL is one of the top three contributors to SNS Foundation (SNSF), under the CSR Act, 2013. In addition to SNSF, DAIPL also routes the implementation of its CSR projects through the Dana Care Foundation (DCF).

With an average annual CSR budget of MINR 33, DAIPL has chosen to impact seven of the 17 United Nations Sustainable Development Goals (UN SDGs) as part of its core CSR mandate.

To support its neighbouring communities during the COVID pandemic, the company also chose to contribute to the two more UN SDGs (i) UN SDG 2 Zero Hunger (ii) Good Health and Well Being. Through its implementing bodies SNSF and DCF, it conducted free distribution of dry ration (grocery) kits to those homeless and migrant workers who returned to their native villages from big cities having lost their employment opportunities due to announcement of lockdown. A total of 474 families have been supported with grocery supplies during the lockdown periods of 2020 and 2021. 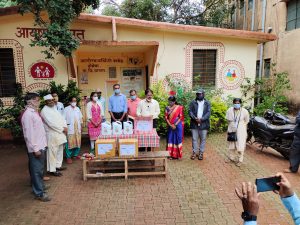 In 2021, with the second wave of the COVID pandemic hitting rural areas of the country in a major way, DAIPL chose to support rural health facilities with masks, face shields, sanitizers, hand gloves and small medical equipment like oximeters.

By structuring its core CSR mandate around seven UN SDGs, DAIPL also aligns itself with the following CSR provisions of Schedule VII of Companies Act 2013:

With SDGs and CSR provisions under Companies Act 2013 as the guiding principles, the major projects under DAIPL CSR include: