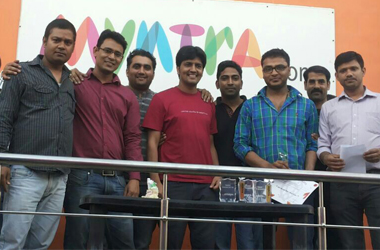 Riju K. Varghese, a then 25-year-old student part of SNS Foundation’s MAST (Market Aligned Skills Training) programme while being employed as an assistant warehouse manager for Myntra bagged the ‘Star of the Month’ award. This was a commendable achievement considering the fact that his hearing and speech had been impaired since birth. “When I first joined Myntra, everybody was sympathetic towards me because of my disability and I was very uncomfortable with that attitude. I slowly tried to socialise with them. I worked very hard to prove that I am an equal competitor and their sympathetic attitude slowly vanished”, said Varghese. He added, “Recently, I got the ‘Star of the Month’ award for completing the maximum targets for the month of March in 2014”. “Before joining MAST, I did not have a source of income and found it difficult finding a job. I am thankful to SNS Foundation and the American India Foundation because of whose assistance I got the opportunity to work for Myntra”, said Varghese. With his earnings, he was able to pursue a degree in business administration to supplement his diploma and had made plans to get a MBA degree as well.