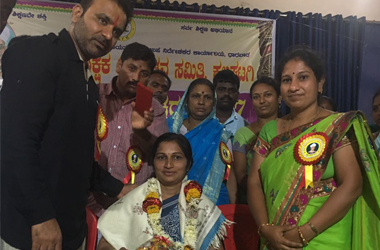 As a part of the CSR initiatives of Dana Anand India, SNS Foundation has been working in Jodahalli helping educate and skill the rural populace as well as bring about infrastructural development in the area. Over the past three years, 100 girls and 20 women have become self-employed after being trained in garment-making. 115 youth have joined the country’s workforce after being trained in factory operations and maintenance. >1000 students and >40 teachers have gained access to hygienic sanitation facilities across six schools of Kalghatgi block in the Dharwad district of Karnataka. Furthermore, 2.000 square feet of classroom space (accessed by 200 students annually) have been added across three schools of the aforementioned block. In recognition of the efforts of the SNS Foundation’s Jodahalli team, the Government Teachers’ Association of Kalghatgi block recognised it as the Best NGO in the block. Ms. Uma Hampanavar, Head of SNSF’s Jodahalli operations was felicitated by Mr. Santosh Lad, MLA, Kalghatgi block and the Minister of Information and Infrastructure in the Karnataka State Government on the occasion of Teachers’ Day.