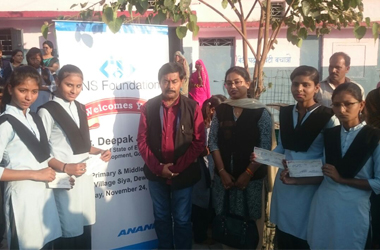 Government school in Siya village, MadhyaPradesh visited by Minister of State for Education and Skill Development

Mr Deepak Joshi, Minister of State for Education and Skill Development, Madhya Pradesh, paid his third visit to the government school in Siya village, which is supported by the SNS Foundation and a number of ANAND Group companies. Mr. Joshi first visited the school in May 2017 to unveil infrastructural additions in the premises, courtesy financial contributions from Gabriel, in addition to the governmental funding. His second visit was on the occasion of Independence Day 2017, when he launched the skill development facilities being provided by the SNS Foundation at the school. On his third and most recent visit, the Minister awarded sponsorship to the school for better sanitation facilities. He also presented individual sponsorships to scholarship awardees of the SNS Foundation pursuing diploma in mechanical engineering at the Government Polytechnic, Dewas, so as to finance their daily commuting expenses.