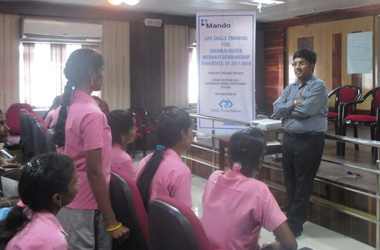 Through the months of December, January and February, SNS Foundation teams across Nashik, Dewas, Jodahalli, Chennai, Hosur and Pune conducted two- day-long personality development workshops for its MEDHAVI scholarship awardees. In these workshops, the awardees, most of who were in their first year of diploma engineering set their goals for 2020 to become ‘good working engineers.’ The workshops followed a uniform pattern and encouraged participants to reflect on their time management skills as they were going through many firsts in their lives – staying away from their homes in hostels, studying and appearing for exams in English language, being exposed to subjects like engineering and drawing, among others. Secondly, the workshop tried to instil in the participants a never-say-die attitude as they were likely to face many challenges in the pursuit of their 2020 goals. The workshops also included interaction and presentations to representatives of ANAND Group companies that had donated to the MEDHAVI scholarship programme.