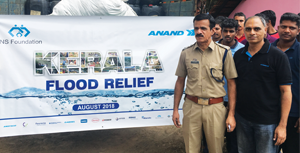 SNS Foundation, with support from ANAND employees, contributed to the Kerala flood relief efforts. >500 families were provided three essential items, a two-burner gas stove, a mixer-grinder and a pressure cooker to help them restart their lives. The initiative was kicked off by Mr. Yathish Chandra, Police Commissioner, Thrissur and Mr. S. Sarathi, AMC Member gave away the first set of three items to an affected family. A team of seven plumbers and four electricians trained by the SNS Foundation in Gurugram, accompanied by two staff members and armed with basic tool kits travelled to flood-affected areas of Thrissur district. The team helped >230 individual households, police stations, government hospitals, anganwadis, mortuaries, municipal committee offices and staff quarters to repair damaged electric and plumbing connections.