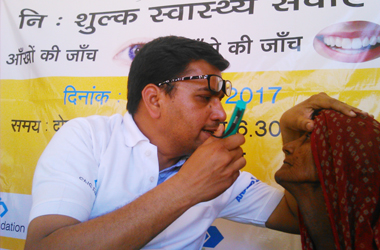 In a bid to elevate the quality of life in the villages near the Jawai, SNS Foundation undertook several initiatives in the realms of education and healthcare. SNS Foundation had adopted nine government schools for improving the standard of classroom teaching and minimise the number of students who were lagging behind. Across these nine schools, SNS Foundation employed nine additional teachers to achieve the aforementioned objective. To support these teachers, a two-day training programme was organised on 6th and 7th December at the Government Middle School in Jivda village. The person entrusted with the responsibility of overseeing the two-day-long workshop was Mr. Ramesh Gharu, a schoolteacher from Barmer. Mr. Gharu shared with the teachers how mobile teaching aids can be made using everyday materials such as old wedding cards, x-ray films and empty pen refills, among others. Furthermore, veterinary camps were organised in three villages surrounding the Jawai: Jivda, Sena and Meeno Ki Dhanee, on 20th, 21st and 22nd December, respectively. A total of 2,595 cattle, comprising primality of goats (58%) as well as buffaloes, cows and sheep, were examined and provided with necessary medicines.